AFM, which is recognized for high resolution imaging of polymer surfaces and nanostructures, can also provide compositional maps of heterogeneous polymer systems. Polymer blends, block copolymers and polymer composites are typical heterogeneous systems, in which the components are combined in such a way as to create materials with desired properties. The components of these materials (plastics, rubbers, inorganic fillers, various kinds of additives, etc) have different properties (mechanical, electromagnetic, thermal, etc) that can be used for their recognition in these multicomponent systems. In some instances, fillers have specific shapes that also help in their identification. Fоr the last 10 years AFM has been broadly applied for compositional imaging by industrial and academic researchers.

There are several factors which should be taken into account for effective compositional imaging of heterogeneous materials. First of all, sample preparation can be crucial for getting reliable images describing polymer morphology. The morphology of thin films and coatings can be imaged from samples prepared by spin-casting, dipping or by other relatively simple procedures. The preparation of samples for the characterization of morphology of bulk samples can be more difficult. In this case, ultramicrotomy with diamond knifes is practically the only choice. Its application for rubbery materials is typically confined to temperatures below the glass transition of the softest rubber component. Surfaces prepared with an ultramicrotome are relatively smooth (roughness is below 100-150 nm) and they are suitable for morphology studies. It should be also taken into account that AFM studies of these samples should be performed soon after their preparation. This will avoid not only air-borne contamination of the sample surfaces, but also any surface coverage by low-molecular weight components exuding from the bulk material.

The second issue is choosing the imaging protocol that result in successful compositional imaging. It is important to realize that for topographic imaging of soft materials with high resolution the goal is to minimize the tip-sample force interaction, whereas for compositional mapping it is to image at various (and, especially, elevated) forces. This is true for imaging both in contact and oscillatory modes. In contact mode, the AFM cantilever deflection setpoint is directly related to the force applied to the sample. An increase of the deflection setpoint leads to higher force imaging. The AFM probe stiffness is also an important factor influencing the level and range of the tip-forces. For example, contact mode measurements with soft AFM probes such as HQ:CSC17 (k ~ 0.1 N/m) might be not effective for compositional imaging of rigid heterogeneous systems. In this case, a researcher should try imaging with stiffer AFM probes with k in the 0.5 - 5 N/m range.

In oscillatory modes, the tip-force control is more complicated, because the effective tip-force depends on several parameters, including drive frequency, free oscillation amplitude (A0), set-point amplitude (Asp) and cantilever stiffness. For many samples, compositional imaging is based on the difference in mechanical properties of the components, the elastic modulus of which could vary in the range of a few kPa to tens of GPa. Therefore, depending on the composition of the sample, AFM probes with AFM cantilever stiffness in the 0.5 N/m - 400 N/m can be applied for such imaging. While using a particular AFM probe the force level can be further adjusted by varying Asp and A0. A low-force operation can be achieved at low A0 and Asp close to A0; whereas a lowering of Asp and increase of A0 leads to elevated tip-forces. Practically, it can be beneficial to examine the same location on the sample, first at low tip-force, then at higher forces in order to find out if image contrast changed to reflect mechanically-different components. Finally, it might be essential to get a low-force image at a large scan size, which includes the initially chosen location. The latter experiment is necessary to insure that high-force imaging did not induce sample damage.

Analysis of the height, phase or force modulation images is important for meaningful compositional imaging. Quantitative estimates of the image areas with different contrast can help define the composition of a particular heterogeneous sample. The more crucial problem is the correct assignment of the areas with different contrast to a particular component of the sample. In compositional imaging of polymers where the phase images are most commonly used to detect and most sensitive to heterogeneities, there is no universal approach for their interpretation. In such a situation it makes sense to use a model system that has the same components in ratios that allow them to be easily identified. In addition, some generalizations can be made between the phase contrast and polymers of similar stiffness or composition. For example, in phase images obtained at high tip-sample forces with a 40 N/m AFM cantilever, inorganic fillers and rigid plastic components typically show up brighter than softer synthetic and natural rubbers. The latter are brighter than oil and other liquid components. Keep in mind that without sufficient force and/or sufficient difference in properties, different components will show no contrast in the phase. That is why it is important to try a wide range of forces, and if necessary several different cantilevers.

A couple of examples of compositional imaging of multicomponent samples are given in Fig. 1 and 2. 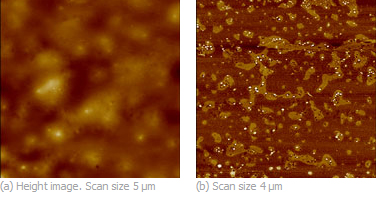 Fig. 1a-b show height and phase images of a flat surface of the impact modified plastics, which was prepared with an ultramicrotome. These images were recorded at high-force conditions, and the composition of the blend is seen only in the phase image. The latter reveals at least three components of the sample. Several domains of hundreds of nanometers in size are visible due the darker contrast than surrounding matrix. A number of bright spots of ca. 30-50 nm in size are also seen in this area. These spots correlate in size with rubber particles present in this material. 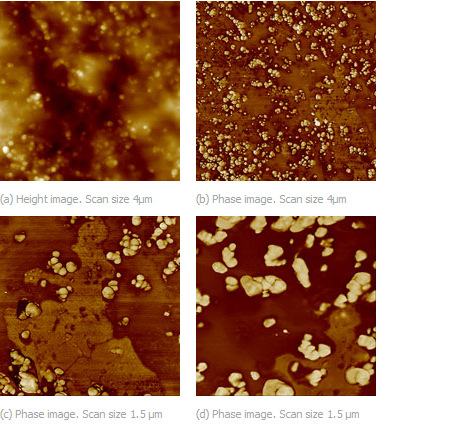 High-force AFM images of technical rubber are presented in Fig. 2a-b. Numerous nanoparticles, which are scattered over the examined area, are seen in both images. The particles exhibit very bright contrast compared to the other materials and can be assigned to rigid carbon black inclusions. These black species assigned to conducting carbon can be additionally checked by electric force microscopy. In addition, the pronounced contrast variations of the phase image indicate a presence of a larger number of components. In the higher-resolution phase image in Fig. 2c one can distinguish a part of a flat domain, which is slightly brighter than the matrix. This domain can be tentatively assigned to an inorganic crystalline filler. In another location shown in Fig. 2d there are also contrast variations inside the darker matrix. These locations might be related to rubber regions with different cross-linking density. Despite the fact that individual components of the polymer blends are distinguished in the phase images additional knowledge about sample composition and phase behavior during imaging at different conditions are essential for rational image interpretation.