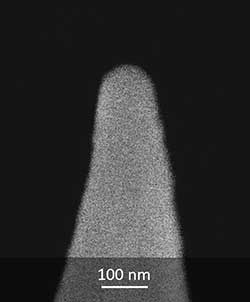 The coating consists of a Co layer on the tipside of the cantilever. The Co layer is formed as a polycrystalline film, which allows steady permanent magnetization in the direction of the tip axis. The Co coating is protected from oxidation by a thin Cr layer, resulting in longer cantilever performance. Typical coercivity Hc of the Co-Cr coating ranges from 300 to 400 Oe.

All chips are pre-magnetized at the facility before shipping to end users. In some cases additional magnetization by an arbitrary strong magnet is required, e.g. SmCo or NdFeB.

Cantilevers with magnetic Co-Cr coating should be used for MFM research. Mapping of magnetic forces to topography AFM scans can be used to characterize the domain structure of the magnetic materials.

The Co-Cr coating on most MFM probes creates a magnetic moment of about 10-13 emu. Imaging in external magnetic field is a way to enhance the sensitivity further as it may increase the moment of both the MFM tip and the sample. Note that the magnetic structure of some samples having low coercivity (permalloy, garnet films, etc.) may be significantly affected by the magnetized Co-Cr coated probe.