Molecular self-assembly is directed through noncovalent interactions, such as hydrogen bonding, metal coordination, hydrophobic forces, van der Waals forces, pi-pi interactions, and/or electrostatic effects. Simple examples include the formation of a micelle or a Langmuir monolayer by surfactant molecules in solution. More advanced examples of supramolecular assemblies demonstrate that a variety of different shapes and sizes can be obtained using molecular self-assembly. 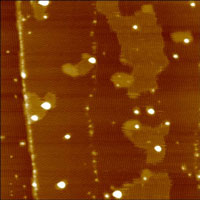 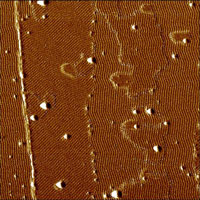 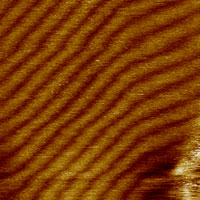 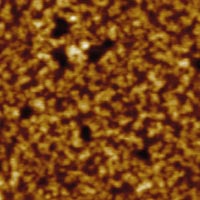 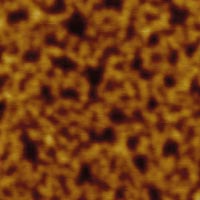 Fig. 1 presents AFM images taken by a Nanoscope IIIa MultiMode AFM and a Hi'Res-C AFM probe. The images are of self-assemblies of palindromic rotaxane molecules formed on HOPG (a, b). Ordered structures were found in ultrathin films (c), and with an increase in film thickness the top layer becomes grainy. Hi'Res-C AFM images of the grain structure show very high resolution. Images (d) and (e) compare routine height scans of the thick film obtained by Hi'Res-C AFM probes and conventional silicon AFM tips.

Generally, organic monolayers on hard substrates have enough mechanical stiffness to be examined with the regular Si AFM probes having stiffness of ~ 40 N/m. The use of softer AFM probes might be necessary for samples with increasing layer thickness if topmost topography is of primary interest. Thicker layers might be necessary to examine with stiff AFM probes when one can visualize heterogeneities and to reveal sub-surface morphology that requires AFM tip penetration into material.

A Langmuir-Blodgett film is a monolayer of an organic material, transferred from the surface of a liquid onto a solid by immersing (or pulling) the solid substrate into (or from) the liquid. An additional monolayer can be added with each immersion or emersion step, thus films with very accurate thickness can be formed. The monolayers are usually composed of polar molecules with a hydrophilic head and a hydrophobic tail (example: fatty acids). 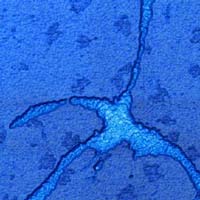 Magnetic iron-containing nanoparticles in Fig.2 are synthesized in a mixed Langmuir monolayer (stearic acid + Fe(CO)5) at the gas/liquid interface via ultraviolet decomposition of iron pentacarbonyl.