The use of AFM for examination of magnetic and electric structures is known practically since the invention of this technique. Initially, the AFM probes made of ferromagnetic and conducting materials were employed for detection of surface magnetic and electric features, respectively. The forces between these objects were detected through response of oscillating AFM probes placed close to the samples but operating in noncontact mode. These measurements have also revealed a need in separation of effects caused by magnetic and electrostatic interactions from those caused by van der Waals forces. The situation is even more complicated when magnetic or electric studies are performed in tapping mode. This problem has been partially solved with the introduction of the so-called 'lift mode'. 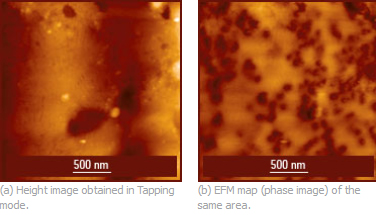 The two-pass technique 'lift mode' is used in magnetic force microscopy (MFM) and electric force microscopy (EFM) for separating the effects of the electric and magnetic forces from the effects of the mechanical forces. For each scan line, the height profile is recorded during the first pass. At the end of the first pass the AFM probe is lifted typically 5 - 50 nanometers above the surface. Then it is moved along the just-acquired height contour at a constant lift height (typically 10 - 50 nm). During this second pass, the changes of the AFM probe resonance frequency or the phase, which are caused by the long-distant magnetic or electric forces, are monitored. In this way the height image is recorded in the first pass and the frequency (phase) image recorded in the second pass. To some extent, this approach allows to separate the topographic and magnetic (electric) effects. However, the two-pass technique required twice more time for imaging. There are also other disadvantages, for example, a remote position of the probe during the second pass, which reduces the resolution and sensitivity of electric and magnetic imaging.

In the past several years the interest to AFM-related modes for probing of electric and magnetic properties has increased due to improvements in EFM and Kelvin Probe Force Microscopy (KPFM). KPFM is a method closely related to EFM but it provides quantitative measurements of surface potential. This is achieved by using an additional feedback mechanism, in which a voltage applied to the AFM probe nullifies the effect of the contact potential difference (between the AFM probe and the sample) on the oscillating probe. In tapping mode operation the KPFM measurements can also be carried out in lift mode. In this way surface potential or surface charge can be measured quantitatively.

The increasing use of several lock-in amplifiers in home-made and commercial scanning probe microscopes allows researchers to perform topographic and electrostatic measurements in a single scan by operating the related signals and feedback loops at different frequencies. This approach has definite advantages compared to the two-pass mode: improved sensitivity, higher resolution and reduced experiment time.