In noncontact mode, the long-distance van der Waals forces are sensed by an oscillating probe, which is excited at its resonance frequency by a piezoelectric transducer and brought in close proximity to a sample. The probe oscillation amplitudes are typically in the range of 1 nm or less. The resolution in this mode is defined by the tip-sample separation of a few nanometers. For the scanning feedback either the vibration amplitude (amplitude modulation mode, AM) or the frequency shift (frequency modulation, FM) of the probe can be used. 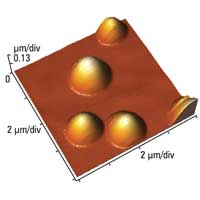 In Fig. 1 an image of microdrops of a liquid n-alkane on a silanized silicon substrate is shown. The use of noncontact mode allowed scanning without influencing the shape of the microdrops by tip-sample forces. 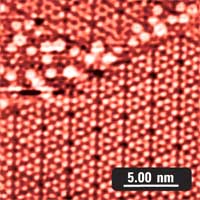 Operation at distances near the sample demands fine tip-force control and the absence of surface contamination. That is why this technique is mostly used in ultrahigh vacuum.

In most cases, the cantilever of choice for this mode is one with a high spring constant in the range 20 - 100 N/m so that it does not stick to the sample surface at small amplitudes. Between two cantilevers having the same spring constant, it is better to use the one with the higher resonant frequency. This lever is generally faster and less noisy. Low-frequency cantilevers are used with AFM systems that do not support probes with short lever arms.

Not surprisingly, imaging in noncontact mode is performed with Si probes usually applied for tapping mode operation. It is likely that in the near future, commercial AFM instruments will operate in all oscillatory modes and the development of fast, broadband controllers will lead to new multi frequency techniques.